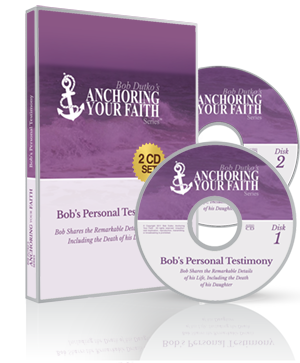 BOB’S PERSONAL TESTIMONY:
Bob’s Shares the Remarkable Details of his Life, Including the Death of his Daughter.

Audio on CD Only

When Bob Dutko speaks in churches, one of the most commonly requested topics for him to speak on is his personal testimony. Bob’s experiences in life truly sound like an unbelievable movie, but they are true.

Bob shares in detail his life of growing up is a legalistic religious cult, as well as the demonic activity throughout his entire childhood and young adulthood. He describes the things he saw and experienced that sound as though they came right out of a horror movie. He chronicles his time of drugs, alcohol, rejecting “religion” as an agnostic, accepting the Lord at an alter call, then doubting and wondering if it was all really true.

He tells the account of his heart miraculously being healed by God, beginning to beat normally for the first time at the precise moment it was prayed for. Bob also tells his hugely popular “bird droppings” story about how God showed his sense of humor with a series of signs that can only be called “miraculous”. Bob also explains his various career paths that led him to being a Christian Apologist and one of the top Christian Talk Radio Show Hosts in the country.

Bob also addresses the many, many trial and tribulations he’s walked through, the medical health issues of his children, many cases of loss and death and more. He also tells the detailed account of his teenage daughter’s death when his only daughter, Colleen died in his arms, what happened at the hospital and the “permission” he gave the doctors to give up.

This 2 CD Set also addresses how we as Christians can walk through trial with a renewed hope and trust in God as Bob instructs on how to take our trials and turn them into a stronger faith in Christ. It’s a powerful story of attack, confusion, doubt, pain, grief, suffering, perseverance, faith, hope, reliance and trust bin a loving, Almighty God.