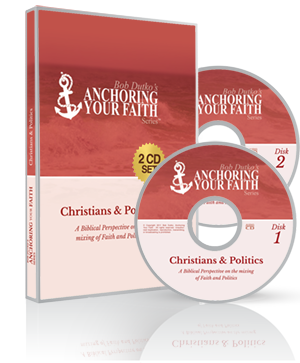 CHRISTIANS & POLITICS:
A Biblical Perspective on the mixing of Faith and Politics

Audio on CD Only

Joking aside, many Christians are very turned off by politics and feel Christians should have nothing to do with it. Other Christians have so submerged themselves into the world of politics that it has become an idol for them. So where do we draw the line? This 2 CD Set attempts to draw that proper balance and understanding.

There are many tough questions people ask about politics. Should we vote? How should we vote? Democrat? Republican? Third Party? Is one Party better than the other? Do we really want unity in Washington? Was Jesus a Republican? A Democrat? What are the hot button issues? Is there a Biblical way of looking at these issues? Is voting Republican merely the “lesser of two evils”? Are conservatives truly anti-woman, anti-poor, xenophobic, homophobic, racist, hate mongering, anti-science bigots? In what ways can Democrats also be unfairly portrayed? Is there really a difference between the 2 Parties? Do we trust in politics more than Jesus? What are the limits of politics? Was Jesus political? Would Jesus have voted? Should Pastors talk politics? From the pulpit? What is the Johnson Amendment? Are Churches allowed to address political issues? Should they?

These are just some of the many, many questions Bob Dutko addresses in this 2 CD Set. Politics is a sensitive and divisive issue in the Church, no doubt. Bob is very careful to make clear that he does not consider the Republican Party the “Party of God” and he rejects the notion that Christians “can’t vote Democrat” or they’re “not really a Christian”. While Bob rejects these notions, he is also very open and honest about his personal political views. He openly and honestly considers conservative political positions closer to Biblical principles and values than liberal political positions. He also realizes and respects the fact that many Christians see it differently. He merely considers this an area that he respectfully “agrees to disagree” with his Democrat brothers and sisters in Christ.

This 2 CD Set takes a fair and respectful approach to the issue of politics from a Biblical (and admittedly) a conservative perspective. It does not suggest Democrats “aren’t Christian” or anything like that. It merely gives a window into how many conservative Christians think, look at Scripture, see politics and see themselves as unfairly and inaccurately portrayed in many areas.

If you’ve ever wondered how to clearly articulate the Christian Conservative viewpoint on all things political through the lens of Scripture, this 2 CD Set will answer those questions for you.